Plovdiv: The Second Oldest City in the World 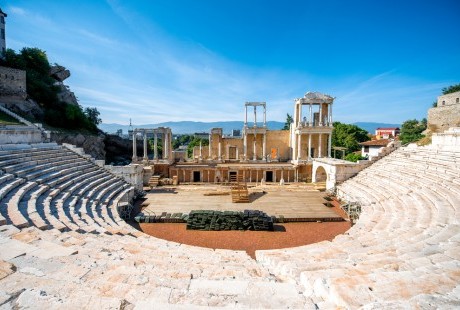 08/17/2017
Background
The South Bulgarian city of Plovdiv is full of surprises. The second largest town in Bulgaria, it is considered the cultural capital. Plovdiv is, first of all, the second oldest continually inhabited city in the world, tracing its history to 6000-8000BC, and was the birthplace of Philip of Macedonia (Rome and Constantinople are much younger cities). Indeed the city was originally named Philippopolis.
History and Architecture
Much of Plovdiv old town features architecture in the 19th century 'National Revival Style.' which is distinctive, visually attractive, and typically Bulgarian. The Roman Amphitheater is also located in this area. An excellent example of a lovingly preserved National Revival property, in the old town, is the 'Balabanov House.' On the lower floor, you can see some locally produced paintings and, on the upper floor, carved ceilings with close attention to detail and some magnificent antiques.
The Roman Amphitheater is one of the most fantastic examples of Roman architecture in the Balkans. It is remarkable that it has survived. The story of its survival is a notable one. The theater was buried in a landslide centuries ago and was only uncovered in the mid-twentieth century, during work to construct a tunnel. Today the Amphitheater is a busy tourist attraction for people from all over the world. Like Rome, Plovdiv was situated on seven hills, though in the modern period the seventh hill was demolished to make way for housing.
In 432 BC, the city was conquered by the Macedonians under Philip, who renamed it after himself. After a period as a Thracian town, it was conquered by the Romans and, at the time of the Emperors Trajan and Marcus Aurelius it was thriving. The Ottomans arrived in 365 AD and the superb Jamaia Mosque with its picturesque  minarets, in the city center, reminds you of this. Plovdiv has one more piece of charm; one of the oldest clock towers in Eastern Europe, near Sahat Tepe. Plovdiv in the nineteenth century was the capital of the Province of Eastern Rumelia in 1878, and did not become part of the new Kingdom of Bulgaria until 1885. A massive monument in Unification Square commemorates this event.
Culture
Interesting cultural attractions include the Plovdiv Opera, the National Puppet Theater, The Trakia Ensemble Folk Dancers and the Ivan Vazov National Library. But that is just the tip of the iceberg; there is simply too much to adequately list in this article.
Plovdiv: European Capital of Culture 2019
As a credit to its vibrant cultural scene, Plovdiv has been awarded the title 'European Capital of Culture 2019.' This honor reflects not just the city's ancient history but the burgeoning arts, drama, and music festivals. One thing is for certain, Plovdiv no longer sits in the shadow of the capital, Sofia.
Eating out
For those looking for a gourmet dining experience then look no further than the restaurant in the Hotel Hebros. Here is the place for top quality food and service in Old Plovdiv. There is a lovely courtyard dining area. (K. Stoilov St. 51).For the budget diner, the Sofra Turkish restaurant offers excellent home made food in a cozy, friendly environment (Jelezarska St. 13, near the Dzumaya Mosque). The restaurant is very cheap. You can always find street vendors selling kebabs, which are delicious and cost virtually nothing.
Getting There: Sofia and Plovdiv Flights
Plovdiv also has its own international airport, which is mainly used in the winter for the ski resorts (which dot the region). However, the many attractions of this great destination mean that it is expected that Plovdiv will have more flights outside the winter. Though it has to be said that Sofia airport is only an hour and a half away.There are many flights into Sofia airport from all over the world, and there are convenient train, bus, and car connections to Plovdiv. Flights from the U.S.A to Bulgaria are available from New York, Chicago, Los Angeles, Boston, and Miami among many others U.S.A. airports ; all flights from U.S.A. are via Sofia Airport.
Check out payless flights for all your travel needs. Plovdiv will be especially busy in 2019, as European Capital of Culture, so it might be better to experience it now rather than later.
<< Back to News