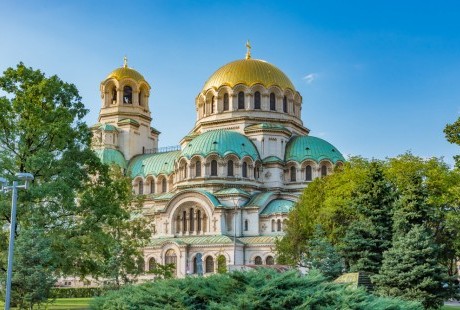 08/16/2017
Overview
Once a small provincial city in the 19th century, Sofia was not even the original capital of the fledgling Bulgarian state (this honor went to Veliko Turnovo). Since being declared the first city of the new nation, Sofia has grown massively to the position it has today, with some wonderful churches, museums and other places of interest (and a population of 1.7 million). There are also some great dining experiences to be had, amid a bustling nightlife. Here we attempt to give you Sofia, night and day.
First of all, Sofia is comparatively small, when compared to other European capitals, and getting around the city is relatively easy, especially with the continually expanded Metro subway system and an excellent tram and bus network. A Metro ticket will cost you 1.80lv for a journey of whatever length.
Arguably, the epicenter of the city is the area around Alexander Nevsky Cathedral and the Boulevards Maria Luisa and Alexander Dundukov. Here are located many swish boutiques and government buildings as well as high-end hotels. The Russian Church is a popular stopping off point for visitors and Sofians alike; you can relax in its small and intimate surroundings. Alexander Nevski Cathedral, on the other hand, is simply huge, it is serene and calming, and you can lose yourself inside as you admire the gold and the iconography.
Sofia has some great public parks too; South Park is particularly interesting, as is the park that houses the Soviet War Monument (Tsar Osvoboditel Boulevard), which was famously resprayed by vandals with the images of brave soldiers recast as comic book super heroes. There are some nice cafes and ice cream parlors, where you can sit on a warm summers day and watch the world go by. The so called Doctors Garden and Borissov Garden are other attractive places to sit out in spring and summer. In front of the parliament building, on the cobbled square, there stands a statue to the Russian Tsar Alexander II, who liberated Bulgarian from the Turks. Sat astride a horse, he dominates the square.
Shopping
For the serial shopper, the Vitosha Street experience is a must, here all the best boutiques are situated for those designer treats, as well as great cafes and restaurants, where all the trendy people hang out, definitely the place to be seen.
Museums
Museums are almost a leitmotif for Sofia; you will be spoilt for choice amidst the art galleries, history museums, archaeology and even a Museum of Socialist Art; which contains hundreds of statues and paintings from the Communist period. The museum is spread over 7,500m2 in a suburb known as 'Red Star.' Most of the other museums are located in the center of Sofia within walking distance of each other.
Nightlife
Sofia really comes alive at night with great eateries and pubs. The Gurkha Indian restaurant seems to be recommended by virtually everyone; with a fusion of Indian and Nepalese food, and is run by a former member of the famous Gurkha regiment (Tsvetna Gradina, Lozenets District near South Park). For cheap and fast food 'Farmers' offers some great sandwiches from a healthy or Vegetarian angle (Tsar Ivan Shishman St), while 'Skaptobara' is supposed to serve the best burger in the city (Iskar St). For a traditional Bulgarian restaurant (called a Mehana) you might want to try Mehana Mamin Kolyo on Pozitano Street, near the synagogue, in the city center. Here you can get a wide range of delicious salads, plus grilled and cooked dishes such as pork ribs.
Pubs
There are several so-called Irish pubs in Sofia, but the really authentic one is McCarthys, run by an Irishman, it offers Guinness on draught and live music, from folk to rock. It can be found at 29A Alabin Street just off Vitosha. There is no food available. For a more off the peg Irish pub try JJ Murphys on Karnigradska St, again off Vitosha.The Tobacco Garden Bar is a key feature on Sofia's party circuit, located in part of the old Royal Winter Palace on Moskovska Street. It gets very packed so you might want to get there early, but it is open all night.
Clubs in Sofia
Bar Flip Flop on Oborishte Street gets five-star reviews, and the Sense Hotel Rooftop Bar offers panoramic views over the city (Tsar Osvoboditel Street). The staff are friendly and the service rapid. There is a range of 'Piano Bars' which is a very popular type of night-time entertainment in Bulgaria.
Flights to Sofia
Sofia Airport is located just a few miles from the city center. Flights to Sofia come from various destinations, flights from the U.S.A to Bulgaria come from many U.S. airports including New York, Chicago, Los Angeles, Miami, and Boston to name a few flights
<< Back to News