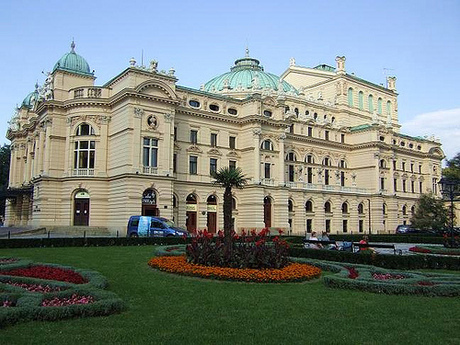 The Juliusz Slowacki Theater in Krakow (Teatr im. Juliusza Slowackiego w Krakowie, or simply Teatr Slowackiego) is one of the first thing one sees after leaving the Krakow Train Station. And its hard to imagine a more magnificent welcome for any visitor. The eclectic wonder is only a hundred years old, and yet it has become an inherent part of the cityscape, and it's hard to picture Krakow without it.


The initial idea to built what was to become the Slowacki Theater was conceived in 1872, during a time when Krakow was undergoing an extensive modernization. The existing Old Theater (Teatr Stary) could not meet the increasing demand of the public. It did take the municipal authorities a while to decide what should come first: the new Theater or the city waterworks, but it seems that those who live in Krakow would rather be dirty than deprived of entertainment.


It took another few years to raise the needed funds and decide where the new Krakow Theater should stand, and finally in 1893 the building was finished. Its architect, Jan Zawiejski, inspired by the opera houses in Vienna and Paris, designed the Theater in an eclectic fashion, which was popular at that time throughout the Austro-Hungarian empire. It was truly a state-of-the-art building – the first one in Krakow to have electric light. There was even a small power plant at the back, in the little building that is now the Miniature Stage.


The Slowacki Theater (at that time called the City Theater – it bears the name of Juliusz Slowacki since 1909) instantly became the center of Polish culture, mostly thanks to the contributions of Stanislaw Wyspianski, Poland's greatest and most influential artist of the turn of the century: a poet, a painter, but also a marvelous playwright and director.


Now, the Theater tries to continue its traditions of a place presenting authentic, touching art, not fearing modern themes, but not forgetting its roots. Apart from the plays, there is at least one more reason to visit the Slowacki Theater: the astonishing, giant curtain, actually an oil painting by Henryk Siemiradzki, dating back to 1894, and presenting the allegory of the Tragedy and the Comedy.