Flights to Bulgaria via Bucharest 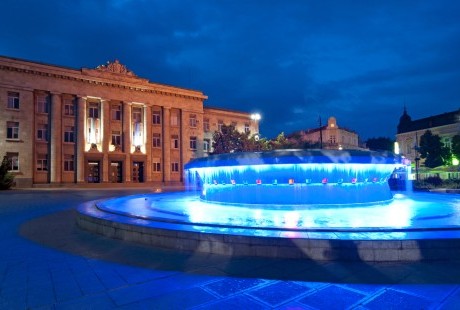 08/12/2017
Bucharest a surprising landing spot for Bulgaria
Romania, Bulgaria's large northern neighbor, offers you some surprising flight connection possibilities. You probably do not think of flying to one country to get to another but the Balkans is a small place, and therefore these cross border connections really can work.
Bucharest Otopeni International Airport
Bucharest Otopeni Airport (officially Bucharest Henri Coanda International Airport) is only about an hour from the Bulgarian border, which is on the Danube, or, more specifically, the city of Ruse. Beyond Ruse (about an hour fifteen minutes) is the city of Veliko Turnovo (Bulgaria's first capital). After Veliko Turnovo; Sofia is about three hours west and Varna three hours east. Consequently, Bucharest is an attractive commuting distance, for those in the Northern Bulgaria region.
Blue Air, Ryan Air, and Wizzair have operational hubs at Otopeni. The most popular routes are London (various airports, mainly London Luton, though for TAROM and British Airways it is London Heathrow), with seventy-one flights a week, Vienna with forty-five, Rome with forty-four, Paris forty-three, Milan forty-two and Frankfurt and Istanbul with forty.Wizzair, Blue Air, Ryanair, and Tarom dominate the airport marketplace. There is a myriad of connections all over Europe via a big list of airlines, and also to Tel Aviv (as well as Istanbul, Doha, Dubai, and Sharm El Sheikh, Egypt).
Public transport links to Bulgaria
There are direct rail (to the Gara de Nord) and bus services to central Bucharest (Piata Unirii), From Gara de Nord you can get train services to Ruse.There are several trains to Ruse each day; one continues to Sofia, and, at Ruse, you can change for Varna and Gorna Oriahovitsa (Veliko Turnovo). Train timetables can be viewed via the Deutchsher Bahn website. Another way to organize your travel may be to get a hire car; the larger rental companies are willing to entertain cross-border car hire.
However, it is best to travel by car or bus as the train is very slow (and we mean very slow, taking three hours to get to Ruse, a comparatively short distance). There is a bus at 16.00 from Filaret Bus Station and another at 23.20 from Bucharest North bus station. We believe that there are now several private bus companies running this route, please search the web. Once at Ruse, you may want to go to the bus station, which is located less than 500m from the Central Railway Station, which is itself 3.5 km from the city center. You can also get several buses a day from both these stations to Varna.
Another travel option is to fly to Constanta, on Romania's Black Sea coast, from here it is about two hours to Balchik and just under three hours to Varna (Blue Air is amongst a few airlines servicing this route). In the summer, there are regular cross border buses (stopping everywhere from Balchik to Varna via Golden Sands and Romanian resorts, such as Mangalia), maybe none in the winter. A taxi to/from Constanta Airport should cost just under 200lv (100 Euro).
Conclusion
We hope we have shown that there are viable options to get from Bucharest into Northern and, indeed Eastern, Bulgaria. This route is particularly easy for Bulgarian nationals, as they can be picked up, at Bucharest or Constanta, by friends and relatives. However, increasing numbers of tourists and visitors are using this relatively simple option.
<< Back to News