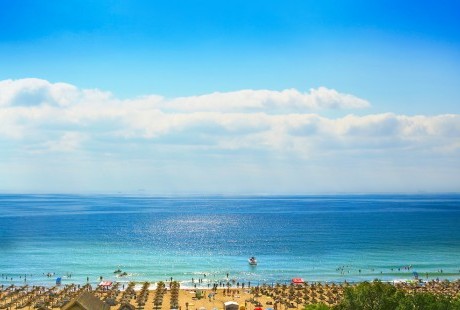 08/08/2017
Beautiful Bulgaria
Bulgaria is rapidly becoming one of Europe's premier tourist destinations. There are a number of reasons for this, and we will outline them in this article, before exploring low-cost ways to get there.
First of all, Bulgaria has great natural beauty: from the verdant mountains of the Pirin and Rhodope ranges to the rich cultural heritage of the many monasteries, the ski resorts of Bansko, Borovets, and Pamporovo and lastly, but not least, the Black Sea coast with its lush sandy beaches and azure sea. In simple economic terms, Bulgaria remains the cheapest place for a beach or ski holiday in Europe. A large beer can cost you around $1.80 and an evening meal for two, with wine, around $35 (in a nice location).
Flights to Bulgaria
There are four principal airports in Bulgaria: Sofia ,Varna, Burgas, and Plovdiv. The primary option, in practical terms, is to fly into Sofia that may be what you want anyway, but if you require the coast take a connecting flight, for Plovdiv the journey can be easily completed by car or bus.
Sofia Airport
Sofia is by far the biggest airport with a full schedule of international and domestic flights. From Sofia, you can fly to London, Paris, Berlin, Rome, Milan, Valencia and many other locations. Also, there are several flights a day to Varna and Burgas. These flights provide popular connections to the beaches for the holidays. Most flights leave/arrive at Terminal 1, but there is an increasing shift to Terminal 2, including national carrier Bulgaria Air and some low-cost airlines.
For visitors from the U.S.A., there are, unfortunately, no direct flights at the moment. However, there are a variety of options involving just one-stop. For instance, if you want to fly from New York to Sofia there are options via Belgrade, Serbia. Other alternatives include via Zurich, Vienna, Warsaw, Munich, and London (Heathrow). Airlines flying these routes include Air Serbia, Swiss, Lufthansa, LOT, Austrian, British Airways and Turkish Airlines. The fastest flight times we could find were around eleven hours.
Customers flying from Chicago to Sofia can gain connections via Berlin, Doha, Frankfurt, Vienna, Zurich, Munich, and London (Heathrow). The fastest journey times we could find were around twelve hours.Those flying from Miami can expect the shortest segment of your flight to take thirteen hours and options include via Vienna or Istanbul. Generally speaking, prices are higher in July and August.
Varna Airport
Varna is Bulgaria's second airport. In the summer it is dominated by charter flights from all over the European continent. Outside of this period, it carries flights to Moscow, Tel Aviv, Munich, Brussels, London Luton, Istanbul, and other destinations. Istanbul is a great connection for flights to the U.S.A. Varna airport is located 7km from the city center. The 409 bus operates a regular service to the airport. Taxi's cost 10-15lv to the city center.
Burgas Airport
Burgas is mainly a seasonal airport for Black Sea tourism; it is the gateway to the southern beaches. Burgas is the second largest Bulgarian airport, located about 10km from the city center.Last year it handled nearly three million passengers, a 22% increase. Bulgaria Air and U.K. budget airline Wizzair fly to Burgas all year round, but the charter airlines only in the summer season. Bus 15 goes to the South Bus station in Burgas.
Plovdiv Airport
Plovdiv is Bulgaria's second city and cultural center. It is just over an hour and a half from Sofia, and is the principal airport for South/Southwest Bulgaria. Plovdiv airport has a huge range of winter fights, due to its proximity to Pamporovo, Bansko, and Borovets ski resorts. Plovdiv Airport is 10km from Plovdiv. Four bus routes are operating to the airport. Taxi costs 15-20lv.
For some great airfare deals search paylessflights.com.
<< Back to News