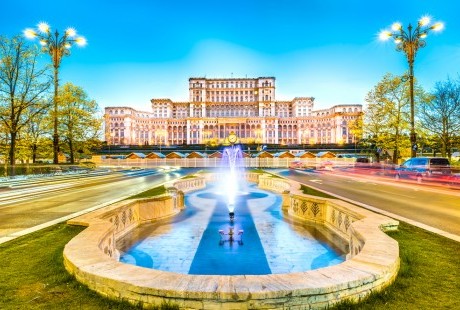 08/14/2017
Overview
Romania is the largest country in the Balkans and one of the most beautiful in the world. From the serenity of the Danube Plain to the beaches of the Black Sea and the eerie ambiance of the Carpathian Mountains and Transylvania; land of the imaginary Dracula and the very real Vlad Tepes (The Impaler), Romania is now very much on the tourist trail. Indeed Prince Charles has actually bought a whole village in Transylvania for ecology purposes.
Bucharest
The capital, Bucharest, with a population of over 3 million, is a bustling metropolis full of hidden history. I say hidden because under Communism much of the city was destroyed in an Orwellian planning revolution presided over by none other than Nicolai Ceausescu himself, churches and other significant buildings were either destroyed or enclosed, to conceal them, by high rise apartments. And this in a city once called the 'Paris of the East.'.
The excellent Hilton Hotel next to the Athenaeum concert hall and the neighboring Royal Palace are surviving examples of 19th-century architecture, with impressive cobbled streets outside. The English Bar in the hotel was the center of inter-war espionage, and you can still imagine the spies conspiring there, as you smoke a cigar and drink a cognac.
Other Things to Experience
The Arcul de Triumf is the Romanian version of the Arc de Triomphe in Paris; it is an interesting anachronism. No trip to Bucharest is complete without a night out at Manuc's Inn, a 17th-century building, which features delicious Romanian food and drinks accompanied by traditional music. Just off Victoria Street is Caru cu Bere, a traditional Romanian beer hall that serves tasty food, the interior will simply stun you with its beauty. For the cultured, a night out at the National Opera beckons you. The Opera House is an amazing building, and the prices are mind bogglingly low.
At the, close by, former Romanian Communist Party headquarters you can still see bullet holes in the masonry from the day, in December 1989, that the revolution reached its peak. You can imagine Ceaucescu speaking on that balcony on that fateful day in history.
Bucharest has a metro subway system and many, many buses, so it is easy to get around.
Transylvania
Rarely can a part of the world be so transformed by a book about someone who does not exist, but Bram Stokers 'Dracula,' a 19th century classic of the horror genre, has changed the history of this Romanian province forever. We cannot deny that Romania, as the title of this article says, is a 'land of legends': there were always tales of werewolves and vampires, but now a whole industry has been built upon it. Dracula Tourism is big news, Bran Castle (the alleged castle of Dracula) is a major tourism destination though really associated with Vlad the Impaler, the real life model for Stoker's character.
The Coast
Romania's beaches are clustered around the city of Constanta and include the resorts of Juno, Jupiter, Mangalia, and Mamaia. The beaches can get very crowded around August. There is a direct train and buses from Bucharest to Constanta, as well as an excellent motorway, and of course daily flights from Bucharest airport to Constanta.
Getting There
Thankfully, for such a large country, Romania is very well served by International Airports. Obviously, there is Bucharest, but also Cluj-Napoca (for Transylvania), Timisoara (in the West), Constanta (For the coast), and Iasi (in the North-East, near the Moldovan border).
Conclusion
Romania is a fascinating country, at a number of levels. Lush green and verdant, mountainous, but with a beautiful sea coast and a culture and history that is so rich that it demands immediate attention. Try it now before the rush. Payless flights can organize all your travel needs for U.S.A.-Romania flights; you can get flights to Bucharest from Chicago, New York, Miami, Los Angeles, San Francisco and Boston.
<< Back to News